Is TMS the Same as ECT? 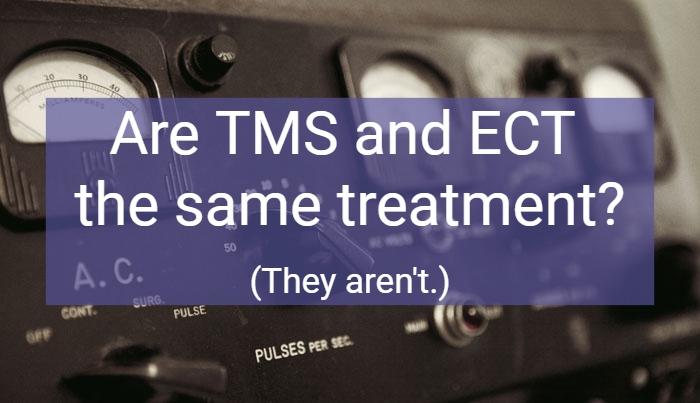 As a psychiatrist specializing in depression, I meet a lot of patients who confuse transcranial magnetic stimulation (TMS) with ECT.  It’s very easy to notice similarities between TMS and ECT – both are used to treat depression, and both involve placing an element over the head that sends signals into the brain.  But these are actually two very different treatments, and they’re used under vastly different circumstances.

If you’ve seen films like Requiem for a Dream or One Flew Over the Cuckoo’s Nest, you may have seen ECT – which stands for “electroconvulsive therapy,” but used to be referred to as “electroshock therapy” or “shock therapy” – portrayed in a rather disturbing manner.  The patient struggles, shakes, and appears to be in horrific pain. It’s important to note that this is not a 100% accurate depiction of ECT, and the film industry’s portrayal of electroconvulsive therapy is a separate issue (1).  But even in real life, ECT is very different from TMS. TMS a gentle and painless procedure with almost no side effects, and can be very beneficial to a wide range of people struggling with depression.

ECT is a procedure performed in a hospital, under general anesthesia.  A large machine is used to direct an electrical current into the brain, which induces a brief seizure.  This is thought to alter the brain chemistry, which may help in the treatment of depression.

The main difference between ECT and TMS is who they’re used for: while TMS is suitable for many patients with mild, moderate, or severe depression, ECT is typically used as a “last resort” for very severe cases of depression, when nothing else has worked or when there is an immediate risk of suicide. ECT may also be used to treat other psychiatric disorders, like schizophrenia.

Patients are asleep while undergoing an ECT session, and feel no pain.  They may feel dazed when they wake up, and may also experience nausea and headaches.  Memory loss is a common side effect of ECT, though not all patients will experience this.

Unlike ECT, TMS is performed at a doctor’s office.  Since the procedure is completely painless and not invasive, no anesthesia or sedation is required.  The patient sits in a large chair, and a metal arm is positioned over their head to deliver magnetic pulses to the part of the brain associated with mood regulation (2).

A TMS session lasts about 20 minutes, and the patient can read, listen to music, or watch TV during their treatment.  The sessions are repeated multiple times per week for a period of 9 weeks. Learn more about how TMS treatment works.

Some patients will feel a mild headache after a session, but most experience no side effects at all.  Since there’s no anesthesia, the patient is not required to bring a chaperone to their appointment, and can return to work or drive home immediately afterward.

While ECT is typically only used in very severe cases of depression, TMS is an excellent alternative to medication or talk therapy for almost anyone with depression.  It’s slowly rising in popularity as clinical studies continue to prove it effective in the treatment of depression (3)(4)(5), and it’s frequently covered by insurance when medication therapy hasn’t worked.